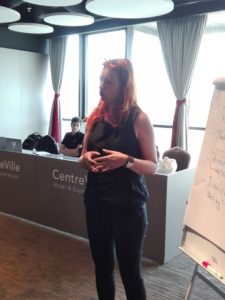 Biljana Tomic participated to the last IPA DRAM Workshop “Levelling-Up” in Podgorica (Montenegro) on 13 July as representative from Bosnia-Herzegovina. IPA DRAM asked her to share her experience on our blog.

She said: “The best achievement of the workshop is the fact that we – practitioners from different countries working on similar tasks – got the opportunity to speak with each other and share views, ideas, problems, solutions… Of course, an important part of this networking was the presence of international experts who were more than ready to share their experience with us. This interactive approach in presenting and solving the problems is most probably the best way to learn from the others, to best use the information gained and adjust it to the context of our own countries and institutions and more importantly to be aware that we are not alone in this ocean of questions, doubts and problems and that there is always someone who is willing to help.”

Feeling as being part of the IPA DRAM family

Ms Tomic appreciated the fact that the countries involved into the Programme are all considered as partner at the same level of the members countries present in the Consortium. She said: “Another important aspect is that IPA DRAM is one of the rare programmes/projects where both Consortium and participants are partners, where everybody’s voice is equally important and this approach gives courage to beneficiaries to speak out loud.”

IPA DRAM operates at regional level as one of its main guiding principle is to enhance the cooperation and capabilities within the whole region of the Western Balkans and Turkey ensuring harmonization with procedures and regulations as much as possible. In this regard, Ms Tomic considers an important goal the opportunity of having a regional tool as i.e. the European Regional Risk Atlas (ERRA) to store data and monitor risks but national ownership should be safeguarded.

“I am convinced that ERRA is something we all need. Now, I also believe that each single country should be the owner of, so to say, its own part of ERRA, what can easily regulated by giving authorization on what kind of data can be seen by who. Why am I saying this? Because we are all ruled by our own regulations and legal framework. Each single country must decide what kind of information and data to be made public and  visible to others. Those are some points that must be taken into consideration while developing ERRA as joint tool.”

Disaster Losses cause high costs for the economy

Bosnia-Herzegovina was stricken by heavy floods during the last years and all that resulted in losses and high costs which have also affected economic stability and growth.  Giving the general increasing exposure to disasters in the whole Europe and beyond, Biljana highlighted what is the main critical area in her country and where IPA DRAM can give assistance to, “I have already mentioned few times in different occasions that BiH urgently needs internationally recognized tool for collecting and assessing data on damages caused by disasters. For now BiH, i.e. its entities and Brcko District, has certain methodology for collecting and assessing data on damages caused by disasters, but we believe that there are some more efficient methods of doing that and we are hoping to get it through this programme or, at least, be introduced to it.”, she said.